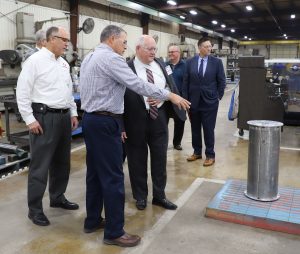 Congressman Estes and his team were led by the Bunting team on an extensive tour of the company’s manufacturing shop as well as Bunting’s on-site testing facility. Congressman Estes, an engineer by trade, was highly interested in Bunting’s products and was given in-depth explanations of our manufacturing process. At the on-site testing facility, Congressman Estes was shown live demonstrations of several pieces of Bunting equipment, including our metal detection and can conveying equipment. By providing live demonstrations and comprehensive explanations, the Bunting team was able to provide a clear picture of how Bunting magnetic separation and metal detection equipment is essential in supporting American industries and the country’s economy as a whole.

“The work that Bunting does is remarkably impressive,” said Congressman Estes. “When most people hear the word magnets, they probably think of the small magnets on their refrigerator. It was great to tour Bunting’s facilities and see just how much more they produce in Newton and talk about the incredibly unique and patented services offered. I greatly appreciated the hospitality and time of the folks at Bunting and am glad that this global company is located right here in south central Kansas.”

Bunting thanks Congressman Estes for taking the time to visit our company, and we are proud to represent the economic strength and hardworking people of Kansas’s 4th Congressional District.