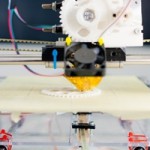 Though 3D printing is a relatively new technology, it is already altering the prototyping process in ways that will have an enormous impact on companies’ bottom lines. Even when 3D printers do not completely replace an industry, they still offer enormous benefits for manufacturers. Injection molding remains the best way to create many plastic items, but it can be expensive to create prototype injection molding molds for products that are in development. These prototype molds do not require the durability of the molds that will be used when a new item enters full production, but they must offer an accurate representation of the results a finalized mold will deliver. Now, 3D printers have introduced an efficient new method for prototype mold creation.

Unlike most methods of creating plastic items that involve pressing a large amount of molten plastic into a mold, 3D printing slowly builds a plastic item in a series of layers. A designer creates a 3D model of their desired object on a computer, and then feeds this data into the printer. Then, the printer creates the object by laying thin strips of plastic on top of each other.

This system is fantastic for rapidly creating single items, which makes it suited for prototyping and other tasks that necessitate fast iteration on a single idea. Using a 3D printer, designers can make a multitude of slightly different items without committing to a specific design until they are sure it functions correctly.

Useful for injection molding but not a replacement

Multinational corporation Unilever found a way to augment its injection molding system with 3D printers. It uses the devices to create different test molds for upcoming products. The plastics used to create the molds have to endure the high temperatures involved in injection molding, and wear out much faster than metal molds, but they are an easy way to test different design concepts.

Some people predicted 3D printing would become a replacement for nearly all manufacturing tasks, but this prediction will not come to pass in the foreseeable future. Though 3D printing is incredibly useful when making one-off items, it cannot scale like traditional injection molding methods, according to The Wall Street Journal.

That’s not to say that 3D printing will not become a vital part of the manufacturing process for many organizations, but does suggest that it will act as a supplemental technology that enhances the efficiency of traditional methods. Organizations that integrate 3D printers into their workflow will be more agile than those that continue with outdated prototyping processes.